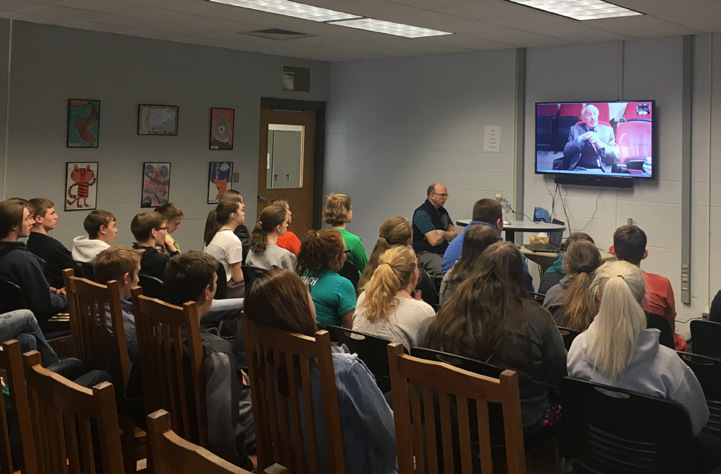 Barbara Olson
The United States Holocaust Memorial Museum defines the Holocaust as “the systematic, bureaucratic, state-sponsored persecution and murder of six million Jews by the Nazi regime and its collaborators.” In 1933, when the Nazis came to power in Germany, there were over nine million Jews living in Europe. Twelve year later, when Allied forces defeated Germany in 1945, only three million Jews remained alive in Europe. Each survivor has a unique set of events which he/she lived through. On Monday, March 26th the members of the sophomore class were able to participate in a unforgettable experience when they spoke/interacted with a Holocaust Survivor. This video conference concluded a cross-curricular unit taught by Mrs. Madden (10th grade English), Mr. Nugent and Mrs. Olson (10th  grade U.S. History). In the weeks preceding the discussion the students learned background information about the Holocaust, analyzed a variety of primary sources, read Elie Wiesel’s autobiography, Night and watched Steven Spielberg’s award winning movie Schindler’s List.

This year students had the honor of speaking with Mr. Amrom Deutsch. Mr. Deutsch was born on August 8, 1925 in Sighet, Romania. During the presentation Mr. Deutsch shared his story of survival, which began when Amrom was 14. Hungary annexed Romania in 1940 and Amrom recalled the anti-Jewish policies beginning then. These policies intensified when German forces occupied his homeland in 1944. Amrom was 18 when he was sent to a work camp not knowing what happened to his family/friends. After five weeks, the Nazis were ready to evacuate the local Jewish population so Amrom was returned to Sighet. He found his family, and other Jews, living in horrible conditions in a ghetto. The ghetto was “liquidated” the next day and he was sent by cattle car to Auschwitz, where he became prisoner A3146. After nine days at Auschwitz he was moved to Buna and eventually to Bergen-Belsen, where he remained until he was found in a semiconscious state by British forces in 1945. After spending four months in a hospital he returned to Bergen-Belsen, where he met his future wife. They were married on January 1, 1946 and became the first couple to be married in Bergen-Belsen after the war. They remained at the camp until they emigrated to the United States in 1949.

When Mr. Deutsch finished speaking Hillsboro students were given the opportunity to personally interact with him during a question and answer session. Mr. Deutsch left the students with words of advice. He wanted the students to “live a clean life - to take advantage of the good life they have and to make good choices.”

“After today I am a witness of the Holocaust.”

“Talking to Amrom helped me with the realization that this really happened to people. I learned that nothing is too hard to overcome.”

“I learned to appreciate my family and everything I have in life.

“Even though there are many articles and pictures out there, it is nothing like hearing someone talk about it who experienced it.”

“Our next step as a generation is to continue to tell this survivor’s story because that is what the victims of the Holocaust deserve.”

This experience is provided by the Museum of Tolerance in Los Angeles,
California. A special thank you to Dan Thompson for his assistance in arranging this experience and for providing technical support during the video conference.